Autumn is coming: six signs of a new season

Ever since this summer’s scorching weather gave way to storms and rain, there has been a distinct nip in the air – a sure sign that autumn is on its way.

But apart from a drop in temperature and the nights drawing in, how else does nature usually signal the approaching autumn?

Here are a few things to look out for. It’s been said that due to the long, hot spell over the summer, autumn has arrived earlier than usual this year, so you may even have noticed some of these things already.

Ask autumn lovers why they are so fond of this time of year and they will undoubtedly mention the spectacular show of colour that it brings. The leaves of trees and other shrubs turn from green to a wide variety of vibrant yellow, red, orange, brown and purple hues.  This is because cooler temperatures and a reduction in sunlight triggers a gradual cessation in the production of chlorophyll (which is a pigment that makes them look green).  The existing chlorophyll breaks down and the green fades, revealing previously hidden shades. 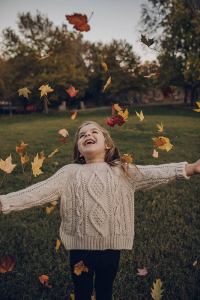 Of course, where foliage is concerned, this is not the end of story.  There is a good reason that our North American cousins refer to autumn as ‘fall’; this is the time that deciduous trees start to shed their leaves.

The process is all part of a tree’s fight for survival during the winter months.  Leaves usually stay connected to their branches due to a hormone called auxin.  However, as the days and nights grows cooler, auxin production decreases and leaves become detached.  This allows trees to conserve energy and retain moisture in their branches and trunk.

2. Conkers and other seeds

Littering the ground with these shiny brown spheres is a horse chestnut tree’s way of spreading its seeds.  Other seeds that disperse in abundance during the autumn include acorns and nuts.  You may also spot bright berries appearing on trees like the rowan, and falling seeds from ash, sycamore and maple trees.  These winged seeds are known to children everywhere as ‘helicopters’ because of the way they twirl in the breeze.

Many species of birds take flight from the British Isles in autumn in search of warmer climes. Swifts, swallows, cuckoos and nightingales are among the first to depart, with other species such as house martin hot on their tail feathers.  Look out for large flocks of birds filling the skies at this time of year.

However, as fast as heat-seeking species like these leave, others take their place.  Birds like waxwings and some types of ducks and geese arrive from places that have colder winters than us, like Scandinavia.

You can read more about bird migration on the RSPB website.

From around late August, hedgerows are often bursting with ripe blackberries.  Other autumn delights include elderberries and sloes.  Time to start making jam and gin!

As we can attest by the copious number of apples that are currently falling onto our patio from our neighbour’s tree, orchard fruits are also plentiful.  Look out for different varieties of apples, pears and plums just waiting to be picked.

Fungi, which refers to organisms like lichen and mushrooms, thrive in damp conditions, so are usually at their peak in the autumn months.  They produce spores which like act like plant seeds to produce new organisms.

There are more than 15,000 species of fungi in the UK.  They come in all shapes, colours and sizes.  The curious names, like dead man’s fingers, jelly ear, beefsteak, stinkhorn, shaggy parasol and bearded tooth, give clues about their often strange and striking appearance.

Did you know that September marks the start of the mating season for bats?  Lasting into October, an integral part of this period involves male bats serenading females to attract a mate.  Their ‘music’ includes special calls that sound like buzzing, clicking, and even purring!

Of course, you are unlikely to be able to hear these sounds unless you it is night-time and you are somewhere quiet.  Even then, the majority of sounds are of a frequency that cannot be heard by human ears without the aid of a bat detector.

Don’t forget that bats are a protected species and it is illegal to disturb their roosts.  Sometimes it is necessary to confirm the presence of bats on your property because, for example, you are planning building works.  In this instances, you should seek the services of a licensed ecologist who can decide whether or not you need a bat survey.